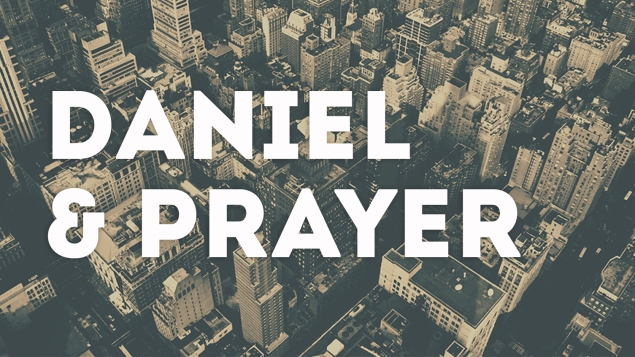 Prayer is practically how we bring in God’s kingdom. If it wasn’t then Jesus probably wouldn’t have prayed in Matthew 6:10, “Your kingdom come.” In creation man received a two-fold commission. Being the only creature in the universe with God’s image, man is first to express God (Gen. 1:26). Having been given dominion over the earth and charged to subdue it, man is second to represent God in His authority (Gen. 1:26, 28). This is a tall order to say the least… To truly express God and properly represent God is not a small thing. We’ve been given a role in carrying out God’s eternal purpose. It’s a noble job description, for sure, but hardly one we have confidence in saying we’re capable of carrying out.

In the book of Daniel we find a man who we can take as our pattern. Daniel was Israeli royalty who literally watched his future crumble and his people starve right before his eyes. While still in his childhood Jerusalem fell under siege by the most powerful military on earth, the Babylonians. As famine within the city walls brought women to the brink of eating their own children for survival, Jerusalem fell. But Daniel survived…

Under God’s sovereignty Daniel was spared, endured the march he was forced to make from the Holy Land to modern day Iran, and was set apart to be taught the language and learning of the Chaldeans that he might “stand in the king’s palace” (Dan. 1:4). Some Jewish scholars even believe that Daniel was made a eunuch by Nebuchadnezzar, fulfilling the prophecy concerning King Hezekiah’s sons in Isaiah 39:7.  This was a man who literally had had everything taken from him. His family, his people, his homeland, his culture, his glorious future as Judaic royalty…

Daniel became nothing. But in the midst of that intense suffering God and His eternal purpose became everything. A desperate man prays desperate prayers. And Daniel’s prayer was exactly what God used to return His people from captivity.

In Daniel 9:2, Daniel understands “by means of the Scriptures” the number of years that would complete the desolation of Jerusalem. Daniel was reading the prophet Jeremiah’s writings (who was alive when Daniel was a child), and he began to understand that in 70 years God would bring his people back from captivity in Babylon. Daniel’s reaction to seeing God’s purpose in the word is priceless and it’s what I want to highlight in this post:

Daniel understood, so he set his face to seek God in prayer. This was a determined man praying burdened prayers that God might move on the earth. Verse 19 of the same chapter tells us what this kind of prayer sounds like.

When is the last time your prayer ended with exclamation points? … God’s authority, God’s kingdom, and God’s dominion is brought to the earth through such prayer. When the Lord finds such a will on the earth who will say yes to Him, stand with Him, and pray to Him in such a way, God will honor that person in the highest regard. Scripture uses two phrases to describe Daniel and we can be sure that by the angel Gabriel’s usage of them, this is how God sees Daniel:

Those who will pray in such a way, bringing in God’s kingdom and fulfilling God’s commission to subdue the earth, are precious in his sight. This is to have dominion. How wonderful it would be to stand before the judgment seat of Christ and hear Jesus say, “man of preciousness… You are preciousness itself.”

Got something to say? Go for it!